Today is the feast of St Martin of Tours, the Bishop of the French city of Tours during the fourth century. Martin was a cavalry officer in the Roman Army, and it was while he was a soldier that the most famous story of his life occurred: outside the gates of the city of Amiens, Martin saw a beggar and on the spur of the moment, cut his military cloak in half to share with him. That night, Martin dreamed of Christ and in the morning woke to find that his cloak was whole again.

Martin is reported to have stayed in the army until announcing that his faith prohibited him from shedding blood, after which he was released. He would go on to become a monk, a hermit and later the Bishop of Tours.

The abbey of Marmoutier, outside Tours, was founded by Martin and became wealthy and influential, as a result of which it was attacked by Vikings in the ninth and tenth centuries.

… taken yesterday while walking along the towpath of the local canal. I should say the towpath beside the remains of the local canal as it was formally abandoned in 1954 (although the last toll had been paid thirteen years previously) and has silted up such that  long stretches look as though they hold no water at all, only huge beds of bright green rushes and sticky black mud. However, the bridges are still there, and the locks and the mills that once flourished, and there are oaks and horse chestnuts growing beside the towpath and in places water even flows. All in all, a good place to walk as summer begins to change into autumn again. 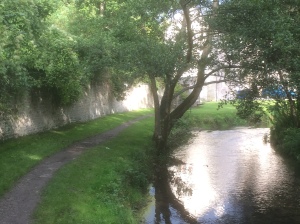 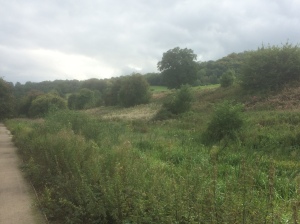 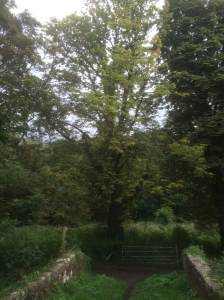 Today in the history of exploration: in 1492, Christopher Columbus set sail from the Canary Islands to cross the Atlantic for the first time; the only surviving ship from Magellan’s expedition returned to Spain in 1522; the Pilgrims set sail from Plymouth for the New World in 1620; and in 1628 the Puritans settled Salem in what would become the Massachusetts Bay Colony. A good day to sit back and read the article in the latest edition of The New Yorker about the infamous Salem Witchcraft Trials of the summer of 1692.

On this day in 1896, Nicholas Romanov was crowned Tsar Nicholas II. He had reigned since the death of his father, Tsar Alexander III, in 1894 and would rule until his abdication following the February Revolution in 1917. Tsar Alexander did not have a high opinion of his son’s abilities as a ruler and kept him away from state business, so when Alexander died unexpectedly and Nicholas had to take the throne, he was woefully unprepared in almost every way.

Although he was an ineffective ruler, Nicholas was devoted to his family, a loving husband and father. His mother, the Tsarina Maria Feodorovna, was a Danish princess and the sister of Queen Alexandra of Great Britain, and the family resemblence between Nicholas and his cousin King George V was striking. Nicholas’s wife Alexandra was also a cousin of George V and was said to have been Queen Victoria’s favourite grandchild.

Some twenty miles south and west of Cork, the Old Head of Kinsale juts into the sea. At the end of a lane that runs between lines of wire fencing, through fields of close-cropped grass sloping down to the sea, there is a golf course. Beyond the greens and fairways stands a lighthouse and about 11 miles beyond this picturesque spot there occurred one of the great tragedies of the twentieth century: the sinking of the Cunard liner RMS Lusitania. Lusitania had been launched on 7 June 1906, at the yard of John Brown & Co. on the Clyde. At the start of the twentieth century the transatlantic route was dominated by German lines, Norddeutscher Lloyd and Hamburg-Amerika, and Lusitania was designed to be fast enough and luxurious enough to win back the top spot for Britain and the Cunard Line. Her contract specified a minimum average speed of 24½ knots; an architect designed her interiors; and she was big enough that 14 miles of the Clyde had to be dredged to get her from John Brown’s yard to the open sea, as were 20 square miles of the Mersey so she could use the Prince’s Landing Stage in Liverpool, Cunard’s home port.

Her final voyage, crossing no. 202, departed from New York’s Pier 54 on the misty morning of 1 May 1915. In that day’s newspapers was a black-bordered advertisement signed ‘Imperial German Embassy’ warning those who were due to sail that British-flagged ships were liable to be sunk in the waters around the British Isles, and that travellers crossed at their own risk. Nevertheless, on leaving New York, Lusitania was carrying 1,959 passengers and crew, as well as cargo including 4.2 million rounds of rifle ammunition and over 1,000 empty shrapnel shells. The German war zone around Britain had been declared as a response to Britain’s own naval blockade of Germany. On 4 February 1915, the Germans had announced a two-week period of grace before the new blockade was put into force: this was to give neutral shipping time to evacuate the area because the German U-boats now had orders to sink any enemy shipping found there, be it a merchant vessel or a warship, and although the U-boat captains also had orders to avoid neutral shipping their safety could not be guaranteed. On Friday 7 May, Lusitania arrived in Irish waters. There were warnings that a German submarine was active in the area and had sunk several ships; orders were in place for shipping to avoid coastal waters. However, when the Lusitania’s captain spotted the Old Head of Kinsale, he seemed unsure of his position and ordered a four-point bearing to be taken, which required steaming in a straight line at a consistent speed for forty minutes. This process began at 1.50 p.m. U-20 had spotted Lusitania at 1.00 and had been watching her. At 2.09 torpedoes were spotted in the water to starboard. The lookout shouted a single warning to the bridge and ran below to warn his brother. By the time the Captain was aware of the danger, it was too late; the torpedo hit at exactly 2:10, striking a coal bunker at about 45 mph.

The ship immediately began to list to starboard; the incoming water pulled the bow down too. A rumbling roar built up inside the ship and there was another explosion that almost tore her in half. The increasingly heavy list made it difficult to launch the lifeboats; they almost all capsized or sank. Time was also a problem: Lusitania was sinking fast, and would be gone within twenty minutes of being hit. In the end, only 761 survivors were picked up and brought to Queenstown, now Cobh. The deaths of almost 1,200 civilians aboard an unarmed ship caused outrage in Britain. There was outrage too in the US: 128 Americans had died. A German spokesman announced that the ammunition, listed on Lusitania’s manifest, and the ship’s status as an auxiliary warship justified the sinking. Conspiracy theories have argued that Lusitania was carrying more war material that wasn’t listed and that this was covered up; there is another theory that Lusitania was deliberately exposed to danger to provoke the US into joining the Allies. Whatever the truth of it is, a lot of lives were lost, a wonderful artefact of the gilded age was destroyed and to the wider public in both Britain and the US unrestricted submarine warfare came of age as a weapon.

According to legend, today is the birthday of the city of Venice, la serenissima. At 12 noon on 25 March 421, the city’s first church (San Giacomo, so dedicated to Saint James rather than to the traditional patron saint of Venice, Saint Mark, whose relics wouldn’t make it to the city for another four hundred years) was dedicated on the Rialto.

I think I might celebrate the occasion by (re)reading Charles and Sebastian’s trip to visit the Earl of Marchmain in Brideshead. Or Peter Ackroyd…

In 1921, Talaat Pasha was coming out of the house in Hardenbergstrasse, in the Berlin suburb of Charlottenburg, when he was shot and killed by an Armenian revolutionary named Soghomon Tehlirian. Talaat had been part of the Triumvirate, along with Enver Pasha and Djemal Pasha, that had run the Ottoman Empire during the First World War and had served as Minister of the Interior and later as Grand Vizier. When it became clear that the Ottomans faced certain defeat in the war, Talaat resigned his office and fled Constantinople in a German submarine on 3 November 1918. Enver and Djemal fled too.

As Minister of the Interior, Talaat had signed orders for the arrest of Armenian community leaders in Constantinople on 24 April 1915, and for the mass deportation of Armenians between June 1915 and February 1916, key moments in what would become known as the Armenian Genocide.

When Tehlirian was tried for Talaat’s murder in Germany, he was found innocent after two days, on the grounds of temporary insanity as a result of his experiences during the terrible events of 1915.

Djemal Pasha would also be murdered for his part in those events, dying in Tiflis, Georgia, in July 1922. Kemal, however, died in August 1922 near Dushanbe in what is now Tajikistan, fighting as part of an uprising against the Soviet government.

The German light cruiser SMS Dresden was sunk at Cumberland Bay, in the romantically named Robinson Crusoe Island, part of the Juan Fernandez Islands off the coast of Chile. Thanks to her speed, Dresden had been the only German warship to escape destruction during the Battle of the Falkland Islands on 6 December 1914 but she was eventually trapped by the Royal Navy cruisers Glasgow and Kent and bombarded. Rather than surrender unconditionally, the commander of the Dresden, Fritz Ludecke, had his ship scuttled.

When the First World War broke out, the Dresden had found herself at sea and spent the first month of the war in the South Atlantic, attacking British merchant shipping off the coast of South America. In September, after being told about large numbers of merchant ships off the Pacific coast of South America, Ludecke ordered the Dresden to pass through the Straits of Magellan and into the Pacific. Unfortunately for the Dresden, hunting was poor and in October she joined Admiral von Spee’s East Asia Squadron at Easter Island.

As part of von Spee’s force, Dresden fought in the Battle of Coronel (in which the British armoured cruisers HMS Good Hope and Monmouth were sunk and the British commander Rear Admiral Cradock, among many others, was killed) and in the Battle of the Falkland Islands in which the Royal Navy avenged Cradock, as a result of which Dresden found herself at Robinson Crusoe Island, where her remains stil lie.

This is the first post on the blog of George Knight. I’m a writer, especially of ghost stories and other supernatural fiction, but I’m also interested in history, travel, natural history and plenty of other things as well, so don’t worry – there won’t just be made-up things on here!